I need your help, please. I am in the contest I mentioned in my last post and public voting has begun. If you would be so kind as to repin and/or vote for my design, I would be very grateful! Of course, you can repin other designs you like, too :)

This is the contest link:
http://pinterest.com/artbeads/tucson-ten/

I am Nat M and this is my necklace: 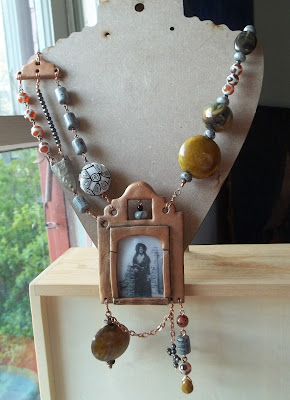 I have been busy making pirate hats out of felt; stay tuned for manicures (coming soon?! lol)

Email ThisBlogThis!Share to TwitterShare to FacebookShare to Pinterest
Labels: jewelry

I make Jewelry too! My necklace for an artbeads.com contest

I guess it is a not-so-hidden-secret that I also make jewelry and typically I keep it off of this blog but...

Artbeads.com (which I have frequented for about 7 or 8 years now) had a contest on their blog to win some beads they had gotten at the big Tucson bead show. Think of this bead show as the ComicCon of bead shows, haha. Anyhow, to win a $50 gift certificate, I have to submit my necklace into a contest and receive the most "Likes" on Facebook or shares on Pinterest. 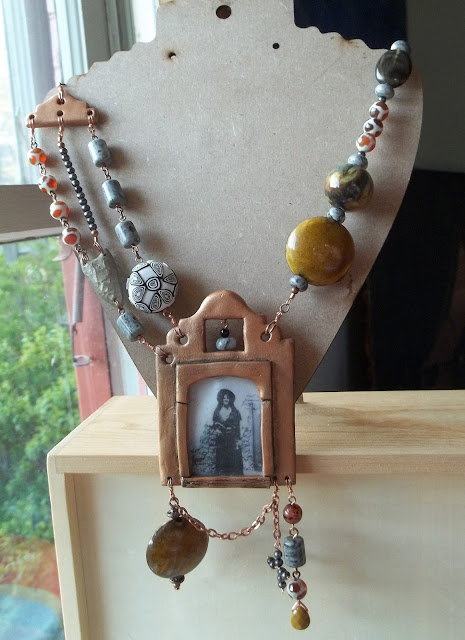 I lived in New Mexico for a year and found the desert inspiring and also sobering.

My image is of a soldadera; she just kinda spoke to me. Women have the most interesting histories the world around, particularly in male-dominated cultures. Seeing photos of women holding guns and wearing bandoleros, standing straight and looking right at the camera---gives one chills! 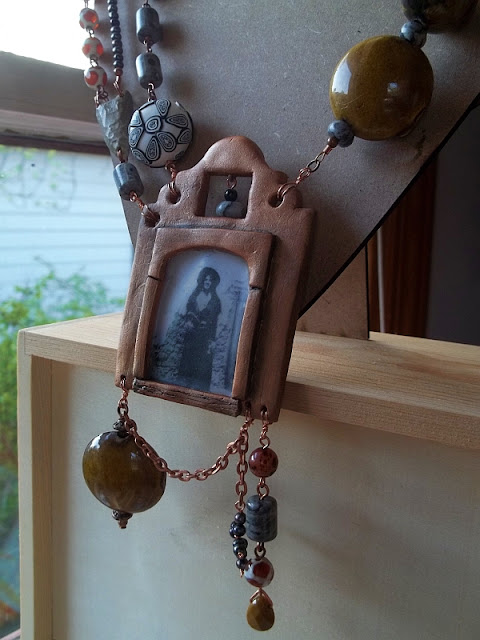 Things I used to make this necklace are as follows: 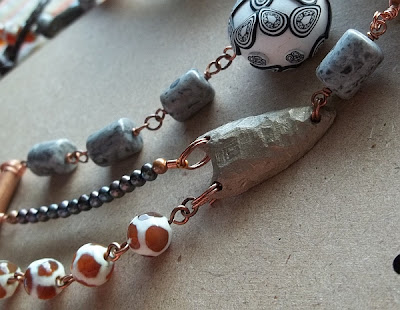 Does it look like a Clovis point?! I hope so! This is where my archaeologist skills come in handy... 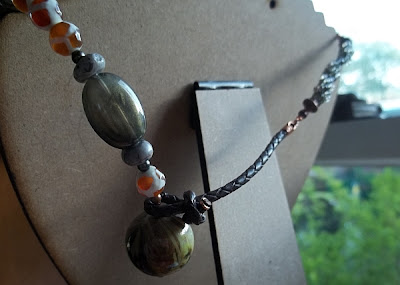 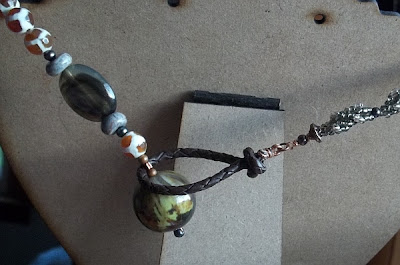 I wanted a unique toggle, as well. I was thinking of bolo ties and whips, all sorts of cattle and horse related paraphenlia...then I came up with this toggle: a braided leather slip knot. I didn't want it to be morbid (like if it were made of twine  and wrapped around the end) and I wanted to use more beads from the prize. It goes on really easy and stays there when it is tightened :D 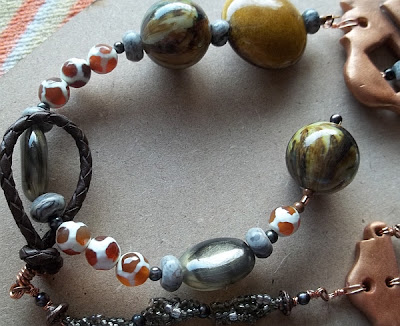 What do you all think? Would you like to see posts on jewelry sometimes?
Posted by Unknown at 5:58 PM 5 comments:

I did a really fast (and sloppy) tape mani the other day. I wanted to do some cute nude nail art and to use Cult Nails Happy Endings which I hadn't used yet. I think it turned out cute even though I had a huge chunk of glitter stuck into the polish of my index finger O_O 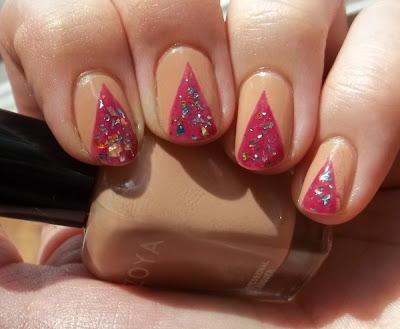 I thought it would look cool to have a nude that matched my skin pretty good and then add a spike of color up from the ends. I used Zoya Helen for the nude and Zoya Paloma (a jelly polish) for the triangle background. I then added Cult Nails Happy Endings to just the triangle. 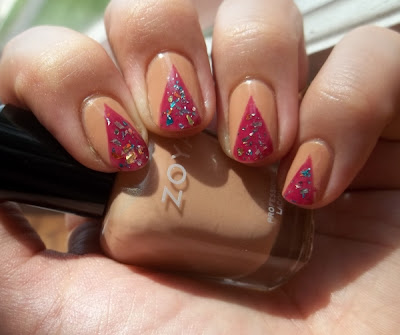 It kinda looks like an updated 80s style design. :)

I had a little fun the other day. It was quite rainy so I decided to do some nail art.

No tape used, just freehand waves. That is why they look so bad, haha! 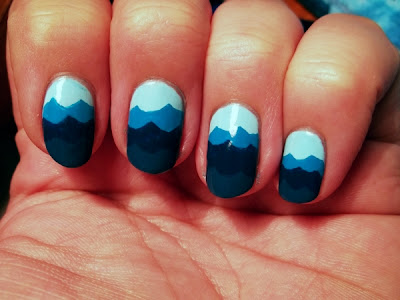 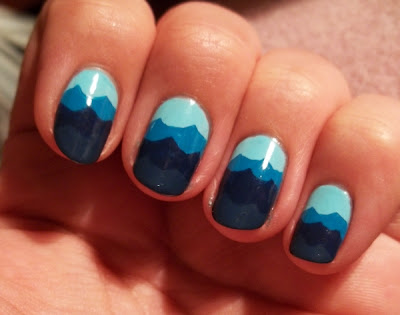 Posted by Unknown at 6:37 PM No comments:

Stampicure of the Day: Contemporary Design

I felt like stamping last night but I wanted a subtle background and a high contrast element in it.

I finally decided on China Glaze Exotic Encounters as a base with Pure Ice Magic as a background using Cheeky XL C. There were two similar designs, one with a swirl and one without so I used the swirl design on my ring finger. 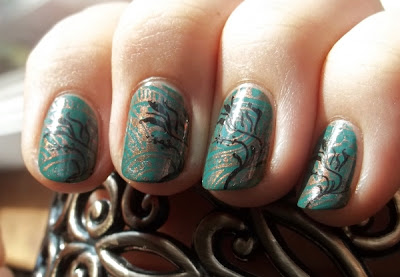 I added a black tree/branch design on over it using Konad Black. 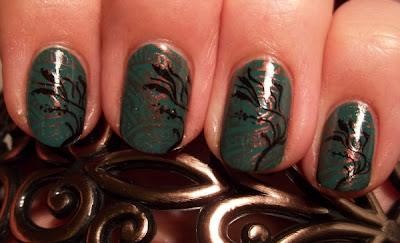 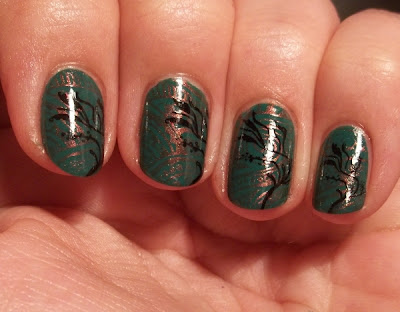 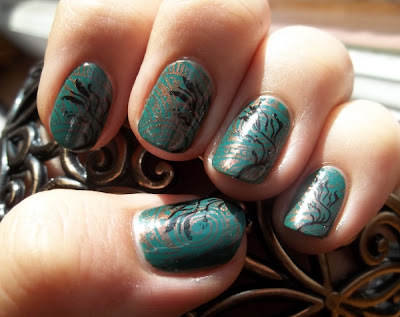 Exotic Encounters is like a cross between a pthalo green and teal with some grey.

It's a very adult contemporary design ;) I like it, not too busy or crazy this time :D

I made this polish awhile back when I saw a Brazilian polish that is very similar on a blog. I had no access to buying it and DIYed it. I added more little glitters than the original but this was the general idea. I used copper and mint green hexes and kelly green mini glitters. It kinda looks like the Essence Fruity color Kiwi a Day (without the big glitters). Super spring-y! 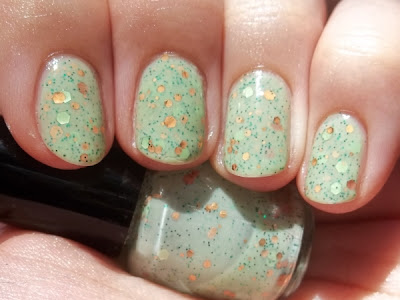 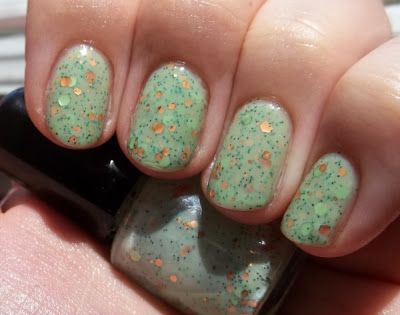 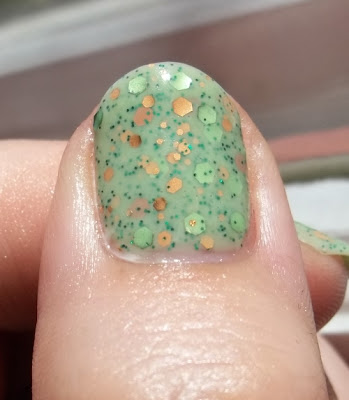 I wish I remembered the brand and color of the inspiration polish! This is still going strong, though, after 3 days. I am about to go play putt-putt golf with the husband and it ends up that this is a super cute putt-putt mani :) It is also a BEAUTIFUL day out! I am very happy.

Why I Won't Be "Lighting it up Blue" for Autism "Awareness"

*gets up on soapbox*

Okay, I am ready. Last year, I could have written this post but I did not, choosing to keep my trap shut. This year is different. If I see another blue Autism "Awareness" mani in my news feed on Facebook, I am going to offload in a NOT very positive manner. So, before that happens, here are my reasons for NOT sporting an Autism "Awareness" mani:

First of all...
Awareness? Is autism the same thing as cancer or something? I think a lot of people know what it is now and I am not sure that awareness will do anything but further stigmatize people with autism. They are people, first and foremost. How about Acceptance? I am all for Autism Acceptance. I myself have a problem making eye contact with people I don't know and I would hate to be pitied or judged because I am awkward. I would rather people just accept me for who I am and not worry so much about me! I know I have been called weird and treated strangely by people for my entire life. This is how I empathize with autistic people. Some people can't understand that and it is okay...as long as you accept that there are other ways of existing. I, myself, cannot understand being able to walk up to people and start a conversation or even flirting. That is okay.

Second...
Curing autism? Not sure how that would ever work and not sure it would be an option for everyone. PLUS---did you ever think maybe there are autistic people (and other neuro-diverse people) who DON'T want to be cured? Have you heard the phrase "nothing about us without us"? Organizations that claim to be charities (like Autism Speaks, a horrid excuse for one) are often created purely for the benefit of parents who have a hard time dealing with their autistic children. It isn't easy to raise a child with a disability as an abled person and no one would argue with that---however, that child has a right to be who they are and treated like a human being, not thrown into truly scary and damaging "therapies" or treated like a non-entity.

Third...
I don't want misconceptions out there about autism and people with autism. I want them to speak for themselves, or if they can't speak, to count on the support of others in their community and culture to do so for their well-being and benefit. Disabled people have their own culture and they deserve to be recognized, their views validated.

Here are some resources I have used myself to learn about people with autism:

If you've supported organizations like Autism Speaks or Operation Rescue in the past, please reconsider your support going into the future. You can do more by spreading a message of acceptance and education rather than fear and misinformation.

Note: If you are a parent or relative, or even close friend, with first-hand knowledge of autistic or neuro-diverse persons, please think of how they feel if you haven't before. It is never easy to be different and stressing the sacrifices and negative aspects of living with autistic people is damaging, not only to their self-worth, but to those autistic children yet to be raised by parents who believe it is the worst thing that could happen to their children.

Thanks for letting me vent.

Here is my mani, a Solidarity Raised Fist with a franken I made: 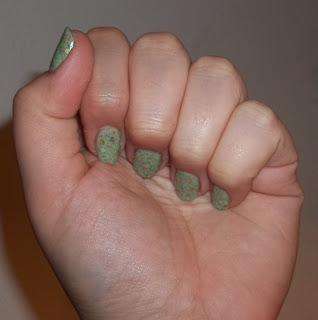